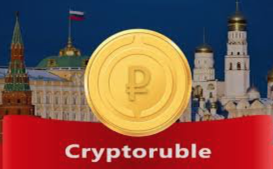 Crypto-ruble can be a substitute for the ruble in blockchain space. The State Duma will adopt laws on cryptocurrency until the end of 2018

A crypto-ruble may appear in Russia – a full-fledged analogue of the fiat ruble, its virtual copy. In order to secure the status of the official cryptocurrency of a country, the adoption of relevant laws and the consent of the Bank of Russia are necessary.

Chairman of the State Duma Committee on the Financial Market, Anatoly Aksakov, said that “a crypto-ruble is the same Russian ruble, only in encrypted form. He tracks the money turnover between the participants of the blockchain, making it completely transparent, ”the RIA“ Novosti ”policy quotes.

In an interview, Anatoly Aksakov stressed that there would be no difference between a real ruble and a crypto-ruble even in their courses. “You get 100 thousand rubles to the bank and get 100 thousand crypto rubles,” Aksakov explained. The rate of crypto rubles will be one to one in fiat rubles. The resulting crypto rubles can be used to purchase goods fixed in the blockchain.

Cryptocurrency in the economy

According to Anatoly Aksakov, crypto-ruble will appear when the blockchain technology becomes a significant part of the Russian economy. Only then will it become necessary to maintain goods turnover and economic processors in virtual currency at large scales, and only then will the mass use of a crypto-ruble for settlements begin.

cryptorouble600.jpg
As conceived by the head of the State Duma Committee on the Financial Market, Anatoly Aksakov,
crypto-ruble will be a complete analogue of the fiat ruble for goods recorded in the blockchain
The Chairman of the State Duma also added that all processes related to crypto-ruble should be strictly regulated by the Central Bank. Only the Central Bank can give permission to create a virtual Russian currency, but so far it is taking this with great care.

The legal status of cryptocurrency in Russia

Anatoly Aksakov clarifies that his ideas about a crypto-ruble are not reflected in the existing Russian draft laws on cryptocurrency.

According to him, the laws on cryptocurrency and crowdfunding will be adopted by the State Duma until the end of 2018

As of November 2018, not a single law was adopted in Russia that determines the legal status of cryptocurrency and everything connected with it.

In March 2018, three bills were submitted for consideration by the State Duma, but at the moment they have not been adopted. One of them is the draft law “On digital financial assets”, in which the concepts of tokens, cryptocurrency, mining, digital wallets and smart contracts are introduced.

The document covers all actions with digital financial assets (cryptocurrency) – creation, issue, storage and circulation. Anatoly Aksakov is among the authors of the project.

In the proposed draft law, cryptocurrency and tokens are recognized as property, a digital financial asset. The possibility of exchanging assets for foreign currency and rubles is allowed, but the conditions of these transactions will be determined by the Central Bank and the President of Russia.

Mining legalization in other countries

Immediately after the appearance of information about the upcoming laws on cryptocurrency, there were rumors about its ban on the territory of Russia. Under the restrictions may fall as mining, and the purchase, sale and exchange of cryptocurrency.

Another scenario means a complete de-anonymization of all transactions with a crypt: users from Russia will be forced to provide their full names. Currently, the government does not refute and does not confirm these rumors.

At the same time in Belarus, mining was officially legalized. The head of state Alexander Lukashenko has officially allowed residents and guests to mine, own and exchange cryptocurrency. All relevant provisions are set forth in the decree “On the Development of the Digital Economy”.

Any operations with cryptocurrency in Belarus are not officially considered business activities. In addition, participants in the transaction can rely on various tax incentives: in particular, they will be exempt from VAT, income tax and income tax. Miners and entrepreneurs are also allowed to make transactions anonymously, without specifying their real names and surnames.

The state of the cryptocurrency market

The peak of the growth rate of all the largest cryptocurrencies came in 2017. Bitcoin, the most popular virtual currency in the world, rose to $ 20,000, thereby pushing many people to buy mining farms. In 2018, there is a different picture: the crypt is gradually depreciating. The Bitcoin rate today has dropped to $ 6568, and the broadcast and lightcoin are priced at $ 222 and $ 56.